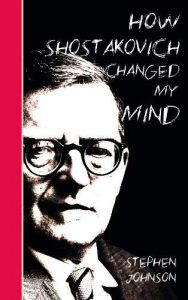 Stephen Johnson begins with Shostakovich’s Seventh Symphony and he describes the circumstances surrounding its first performance, at Leningrad in 1942. How the Germans had laid siege to the city and how Leonid Govorov, commander of the Soviet troops, broadcast the concert so that the enemy would hear it: to let the Germans know the kind of people they were fighting against. He writes of its rousing effect in the concert hall, that hour-long standing ovation at the music’s end, all the rest.

Then Johnson goes on to reflect on why this particular symphony holds such power still, even with listeners today, now far removed from that time and place. One reason, apparently paradoxical, is that Shostakovich’s music is the very opposite of escapism; he is not at all interested in sweetening the pill of existence. He is instead aiming to be true to experience, to convey authentic emotion; and if that means acknowledging horror and grief, trauma and travail, then so be it.