All the time I’ve been working away, writing and broadcasting, something else has been fermenting away in the background.

I use to compose as a child: mostly impossibly ambitious things like symphonies and a concerto for five saxophones and orchestra, hardly any of which got anywhere near the finishing line. I studied composition at university, and was encouraged by my tutor Alexander Goehr and the composer and writer Robert Simpson. But after graduating the flow soon started to dry up – I found it increasingly hard to silence the critic in my own head. Instead I took up journalism and broadcasting, and for the last thirty years that has been my day, and sometimes night job.

Then, about fifteen years ago, after a close bereavement and a particularly nasty depressive episode, I started composing again – painfully slowly at first, but with growing pleasure and confidence. In marked contrast to my boyhood efforts, the things I wrote now were mostly small scale: songs, and short unaccompanied choral pieces. But towards the end of 2013, not long after the death of my mother, a sketch for an orchestral piece that had sat, inert, on top of my piano for seven years suddenly leapt into life. Fitting in such a demanding project was hard, but I soon found it had a momentum of its own. Every time I came back to my desk it was there waiting, straining at the leash. The musical ideas merged with images form a favourite novel: Mikhail Bulgakov’s riotous, life-affirming The Master and Margerita. Soon the piece had a title, Behemoth Dances, named after Bulgakov’s magnificent cat-demon Behemoth, who wreaks such havoc in Stalin’s Russian, yet whose pranks prove to be strangely redemptive for a few privileged souls.

Thanks mostly to the wonderful efforts of Andrew Jamieson from IMG Artists, Behemoth Dances was performed – not once, but five times, and by the Moscow State Symphony Orchestra under its direction Pavel Kogan, in 2016. Inspired by that astonishing and deeply rewarding experience, and again encouraged by Andrew Jamieson, I began work on a Clarinet Quintet, for Emma Johnson and the Carducci Quartet. I can hardly believe my luck in finding such outstanding performers, and in securing three public performances.

Hearing my own piece alongside the two greatest works for clarinet and string quartet is going to be – well, interesting at least. But I am very proud of it. There is an element of the demonic humour of Behemoth in the central scherzo, but the slow outer sections explore something only hinted at in the orchestral piece. There’s an elegiac element here, and composing this released a flood of memories, some hinted at in the music, some openly acknowledged.

For those of you who’d like to know more about Angel’s Arc – including what the title means – see my programme note for the three performances. 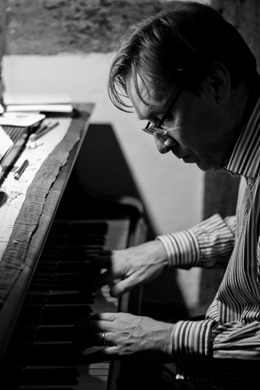